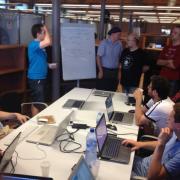 Last week I assisted to SevillaTipo, a typography event for designers that took place at Sevilla, organized by my friends at Kitiplá. There were some conferences on Friday, and a full workshop on Saturday and Sunday. Sadly, I only could be at the conferences.

But... what the heck I was doing in a designers conf? Well, it's easy to explain. I work every day with these kind of creative people, and I have still some problems on communicating effectively with them. Being their guest, I have to shut my mouth and listen, and this is the only way of learning how they think or feel.

Conferences were pretty interesting. Javier Usabiaga and Marta Armada shared their thoughts on the current state of art in web typography, and how it has evolved from web safe fonts to newer technologies like Google Webfonts, and how typography is becoming more important on the www. They also introduced how they feel about the typography future in the mobile world.

After this one, Octavio Pardo introduced how a typography is conceived and how to design it. The new trends, the work behind a typography and his experience on this world. Looking at the passion distilled on his talk, I'm sure that the workshop was really great.

Best of all, it seems that this event has not been a solo in the Sevilla techie space. It has been the start of a designers community, and hope that more events like this one will follow.

Hello world! It has been so long that I decided to build a new blog... but it took too much time.

It is simple, but at least, it is online!

It could look very ambitious, but it is a multilanguage blog. What does that mean? That I try to post in English and Spanish. You can select the language you want to read it in the top right corner, and subscribe on the 'Syndicate' block.

I hope that I would perseverate on updating it :-)